Beyond the Iditarod: Denali Dogsled Stories

The following is an article written by Heather Mundt, a writer and resident of Denver, CO, following her adventure with Denali Dog Sled Expeditions.

Howl of the Wild

….I sit in the basket of a toboggan sled, watching the fluid line of sled dogs run before me, a kaleidoscope of fur disrupting the infinitely white landscape. An Alaskan told me winters here are black and white and many shades of gray. But that Spartan palette is also infused with muted maroon and yellow vegetation, interrupted in the distance by snow-dusted spruces and craggy mountains.

From my low vantage point, I notice dwarf birches, their naked branches black against the snow. We travel through walls of frosty willow bushes, the leaves a salmon-colored blur, and I shield my eyes from their reaching, skeletal limbs.

It’s day one of our three-day dog sledding adventure. Jon Nierenberg, a 21 year mushing veteran, will guide us during the excursion. “I think taking people on a guided tour into the park is an authentic way to see it, and is something that satisfies the people who want to do adventure travel,” he says.

“It’s a living history type of thing. It’s very similar to the way it used to be done in the old days.”

On this trip we’ll pay homage to those bygone eras, when indigenous Alaskans relied on dogs for tracking game and hauling gear to seasonal hunting grounds, when traveling Into The Wild meant entrusting your life to canine instinct.

We awake to an indigo sky, still disoriented by the mere five hours of daylight available here in January. We struggle with the thoughts of leaving the cocoon-like-warmth of our cabin, named Sled Dog and adorned with worn sled dog booties of assorted colors. It is beautifully decorated, very cozy and feels like the comforts of home.

Jon also outfitted us with parka coveralls with a hood – fur trimmed – pack boots rated to -70 degrees, and a pair of overmitts, oversized mittens that overlap our coat sleeves and form an elastic, airtight seal at mid-forearm. We both dressed entirely in black, which Jon jokes will make us easier for him to see in the snow if we fall off the sled.

Out in the dog yard, Jon’s 23 dogs pace restlessly, anticipating their impending run. When people think of sled dogs, they typically envision brawny Alaskan Malamutes or blue-eyed Siberian huskies, but Jon’s affable dogs are Alaskan huskies, which are the most common mushing breed. They are bred for temperament, intelligence, body type and ability, not necessarily appearance.

I’ll have five on my own team today. My lead dog, a petite blond female named Saska, patiently keeps the gang line taut as she awaits teammates. I harness and hook them to the line. We will be following Jon, so we won’t need to command the dogs “gee” or “haw”, right and left perspectively. I meticulously check the line that holds my sled to the fence, practicing unhooking its panic snap that allows quick release.

Sensing we’re leaving, the dogs’ howling reaches a fever pitch. Hearing Jon’s “Hike” command, I fumble for the panic snap, unhooking my line in time. There is silence, save for the steady shhhh of the runners gliding through the snow beneath me.

I’m surprised at how much warmer I am driving the sled than riding, shifting my weight and anticipating the trail ahead.

The terrain before me is smooth…I find myself relaxing, looking occasionally away from the dogs and trail, and appreciating the landscape. Jon signals me to stop, pointing skyward toward a “sun dog”, a columnar rainbow caused by sunlight refracting thought ice crystals suspended in the atmosphere.

We travel through a variety of terrain, some flat tundra but also many more hills and climbs through mountainous areas. I begin to enjoy the hills, both the challenge of pushing the sled upward and the thrill of not knowing what to expect on the other side.

The blue sky peers through streaks of white clouds, the landscape bathed in golden hues of late-afternoon light. We tip our sleds on their sides, set our snow hooks- “emergency brakes” – in the packed snow, and unhook the dogs’ tug lines so they can rest. Several begin rolling in the snow, a “snow bath”, which indicates they’re enjoying themselves. Jon notices fresh caribou tracks nearby, and we investigate and we eat. But we don’t linger, hurrying to return to the trail and restore the circulation to our now cold extremities.

We continue the last 6 miles in a tree-dense riverbed and arrive at the cabin near dusk. Tucked and towering spruce, the honey-colored log cabin is a welcome sight.

After dinner, Jon invites Worf inside. It is customary for dog mushers to give lead dogs extra attention, and Worf is one of Jon’s young leaders. He sniffs his new surroundings and lies on the floor,while Jon kneels down to wrestle with him. I marvel at how similar these dogs are to mine.

Our leaving….We have mixed feelings about leaving, our first dog trip behind us. For three days those dogs were ours, and we each feel a connection to them, to this place. As we begin to leave, we watch longingly through the car window as the team readies for a practice run. We smile, hearing the now familiar call of the wild from the dogs, already urging us to return. 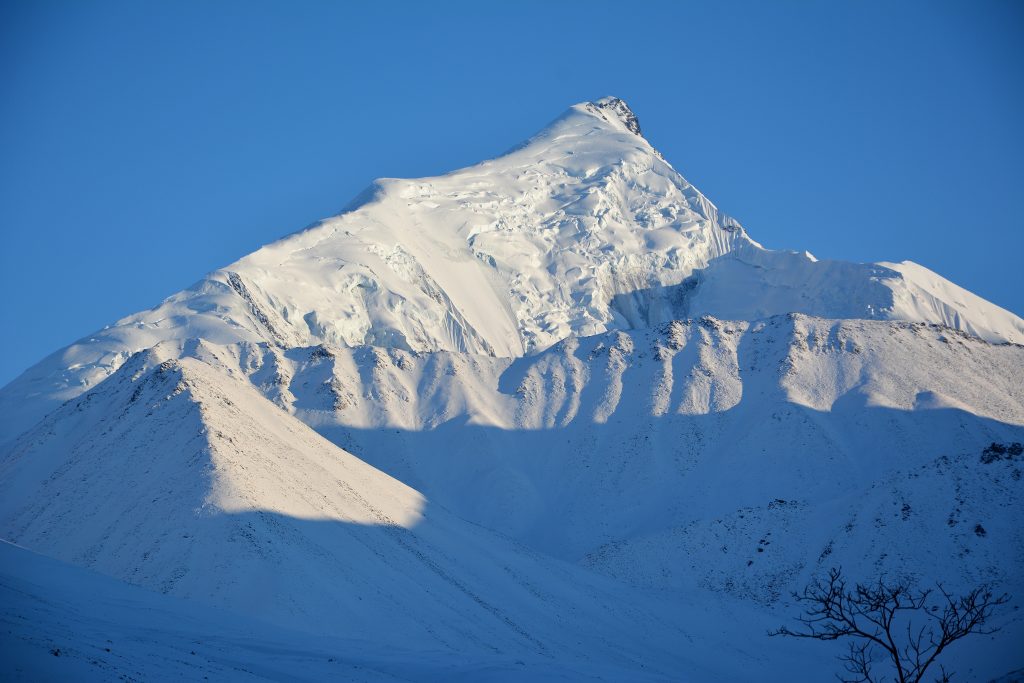 Here is another comment written by guest Clay Singleton of Austin, Texas following his 10-day dog sledding tour with us:

In the summer of 2001 when we were on a driving trip in Canada and Alaska we had the good luck to stay at the EarthSong Lodge on two occasions. While at the lodge, I saw Jon’s slide shows and heard about the dog sled trips he offered. Before leaving I was already trying to figure out when I could get back to Alaska for a dog sled adventure of my own.

Two years later my dream came true and I have enjoyed a 10 day trip with a friend from my childhood. We have seen some of the most amazing scenery and enjoyed the instruction and friendship of Jon on the trip. It has been an experience I will remember for the rest of my life with great fondness.

I can only assume my stories about the trip will stay true to the facts–let’s see we had temperatures -20 or -30… I can see the possibilities already. I am sure my family will never tire of the stories which I will no doubt repeat many times over the years. Thanks to Jon and Karin for making this trip a reality!

Here is an excerpt from a Conde Nast Traveler Magazine article from the May 2002 issue entitled “The company of dogs.” One of their writers, Kathleen Lee, took a dog sledding trip with us and wrote about her experiences in this article.

…I realized as I lay outside in my sleeping bag that night, perfectly warm, watching the Dipper twirl over my head, we are lucky to have something -the natural wonder- that cannot be ordered like items from a catalog. I had met great dogs, discovered a new and extraordinary form of travel and I had experienced the fierce beauty of Alaska, its roaring breath right in my face…

…Weather was not something we could command; it was something that must be lived by. Snow, lifted from the ground, blew through the air like dust. There is always something exhilarating in extreme weather, in feeling the hard, indifferent force of nature.

There was something wild and thrilling in the great expanses of snow, soft and crisp, pristine and undisturbed, that stretched away from us. It seemed a hallmark of this wilderness, its breathtaking, untrammeled quality. We were in a silent, expansive world, harsh and delicate.